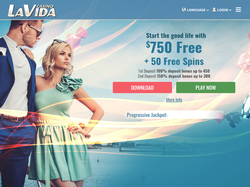 Casino La Vida is an online casino also offering baccarat, blackjack, live dealer games, other games, roulette, scratch cards, and video poker using Evolution and Microgaming software It is one of 13 online gaming sites owned by Digimedia Limited. The site's primary language is English. It supports both downloadable software and the ability to place a wager without a download.

Extra incentive for Fortune Affiliates partners
14 Oct 2014
Fortune Affiliates’ (FA) partners have the opportunity to attract many new players, thanks to the online promotions currently being displayed on FA’s casino websites. read more