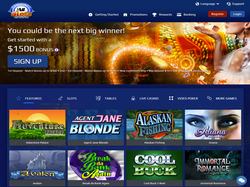 All Slots Casino is an online casino also offering baccarat, blackjack, live dealer games, other games, roulette, scratch cards, video poker, and virtual sports using Evolution, NetEnt, and Microgaming software licensed in Malta. It is one of 13 online gaming sites owned by Digimedia Limited. The site's primary language is English. It supports both downloadable software and the ability to place a wager without a download.

Welcome Offer: $1500 Welcome Package!
New customers joining All Slots Casino are offered $1500 in bonuses across your first 3 deposits. Enjoy up to a $500 Bonus on each with a deposit of 10 units or more on each!

* 1st Deposit - Match Bonus up to $500 • 2nd / 3rd Deposit - Match Bonus up to $500 • New customers only • Min deposit $10 • 50x wagering. All new players have 7 days from the date their account was opened to claim their new player sign-up bonus. Thereafter the Sign-Up bonus will be unavailable. T&C's Apply, 18+, Please Gamble Responsibly, BeGambleAware.org