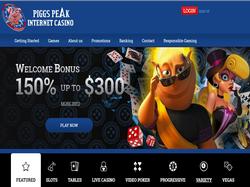 Piggs Peak Casino is an online casino also offering baccarat, games, live dealer games, lottery, and roulette using Evolution, NetEnt, and Microgaming software licensed in Malta. It is one of 13 online gaming sites owned by Digimedia Limited. The site's primary language is English. A download is not required to place a wager.