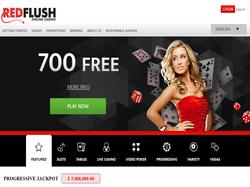 Red Flush Casino is an online casino also offering baccarat, games, live dealer games, lottery, and roulette using Evolution, NetEnt, and Microgaming software It is one of 13 online gaming sites owned by Digimedia Limited. The site's primary language is English. A download is not required to place a wager.

Red Flush Casino lights up January with the Gung Pow online slot
8 Jan 2015
Gung Pow is a non-progressive online slot whose design has been inspired by the traditional Chinese New Year.  read more

Support  - support@casinodesk.com
Affiliate  - support@fortuneaffiliates.com
Support Option  -  Live Chat.
Errors/Omissions? If there are any inaccuracies in our data, please Let Us Know!