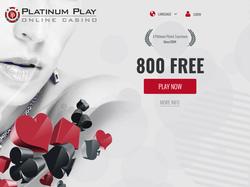 Platinum Play Casino is an online casino also offering baccarat, blackjack, live dealer games, other games, roulette, scratch cards, video poker, and virtual sports using Evolution, NetEnt, and Microgaming software licensed in Malta. It is one of 13 online gaming sites owned by Digimedia Limited. The site's primary language is English. It supports both downloadable software and the ability to place a wager without a download.

Welcome Package: Up to $800 in Bonuses!
Platinum Play Casino is offering new customers up to $800 in Bonuses across your first three deposits! Register your player account and deposit 10 currency units or more on each to receive the bonus.

This Week in Gambling: The end of federal efforts to ban online gambling?
14 Nov 2017
Now that online gambling legislation has been passed in Pennsylvania, speculation is growing that other states may soon follow suit. J. Todd is also covering news from PokerStars and New Hampshire. read more

Platinum Play introduces exclusive bonus offer
19 Apr 2017
New players can receive 60 free spins and a bonus of up to $/€1,000 over their first five deposits. read more

Extra incentive for Fortune Affiliates partners
14 Oct 2014
Fortune Affiliates’ (FA) partners have the opportunity to attract many new players, thanks to the online promotions currently being displayed on FA’s casino websites. read more