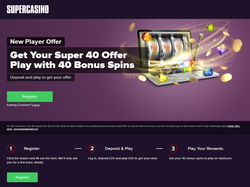 * New players only; Depositing via Moneybookers, Neteller and Skrill are not be eligible for this offer. Available currencies are GBP, EUR and CAD. Conversion £1 = €1 = C$1. T&C's Apply, 18+, Gambling Can be Addictive, Please Gamble Responsibly, Licensed and regulated by the Malta Gaming Authority under licence MGA/CRP/108/2004

Lord of the Ocean: Magic

Super Casino shares thoughts on potential revenue for Californian online poker market
13 Jan 2014
It has been reported by iGamingBusiness that a new study reveals that the legalization of online poker in California could generate revenue of up to $263 million in the first year. read more

UK households surveyed in poll vote in favour of television gambling
26 Sep 2012
23% voted against casinos airing on television, 49% where unconcerned about the recent rise of slots allocated in poll of 1000 households. read more