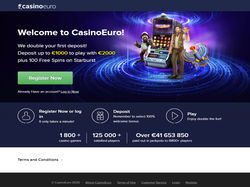 * The offer is valid for new customers who have registered with CasinoEuro on November 3, 2020 at 16:00 CEST. This offer is valid only for customers and persons living in Finland who register through the partner page. The offer must be redeemed within 30 days of registration. The offer will be canceled after 30 days. Skrill or Neteller deposits cannot be redeemed for this offer. T&C's Apply, 18+ | Terms and conditions apply Play responsibly GamCare.org.uk | BML Group Ltd. is licensed by MGA: MGA / CRP / 108/2004.

* Available only to players residing in Norway. Only your first deposit will qualify you for the offer. The minimum deposit to activate the bonus is NOK 200.The maximum bonus available to you is the same amount as your deposit amount, and a maximum of NOK 5,000. The offer must be picked up within 14 days of registration. You will not be able to withdraw this offer after these 14 days have passed. Deposits made via Skrill and Neteller will not qualify for this bonus. The bonus must be wagered a minimum of 40 times within 5 days after the bonus has been paid out. The free spins are available on the Fire Joker slot machine immediately after the deposit requirements have been met. The free spins must be redeemed within 5 days. Free spin winnings are bonus money that must be wagered 40 times in 5 days before withdrawals can be made. If the wagering requirement is not met by the deadline, all winnings from the free spins will be lost. T&C's Apply, 18+, Gambling Can be Addictive, Please Gamble Responsibly

REST OF WORLD Welcome Offer: 100% Match Bonus up to €1000 + 100 Bonus Spins!Double your deposit at CasinoEuro! New customers are welcomed with a 100% First Deposit Bonus up to €1000 (or currency equivalent) plus 100 STARBURST Spins!

Register your account, deposit €15 or more, select the 100% Welcome Bonus and PLAY! Once you deposit €25, 100 STARBURST Spins worth €0.10 each will instantly be added in the game. Open STARBURST to claim the bonus spins within 5 days of receiving them.