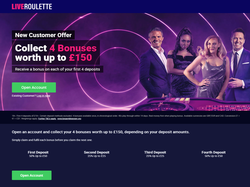 countrycode=US
Welcome Package: Collect 4 Bonuses Worth up to £150!
LiveRoulette is offering new customers four (4) Deposit Bonuses worth up to £150 to use in the Live Casino or Casino! Take one bonus to unlock the next. Register your player account, make a minimum deposit of £10 or more on each deposit to claim the offer.

MegaJackpots Wheel of Fortune On Air

Dragons of the North