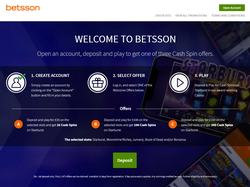 Upon making your first deposit, select the Casino Bonus and deposit 100 NOK or more to immediately receive the 200% Match Bonus. Open the slots games to activate your Bonus Spins!

* Only available to new customers from Norway who have not previously made a deposit; The maximum bonus amount is NOK 2,000 per deposit. Only your first deposit can give a welcome bonus. Bonus amount must be wagered 40x after the deposit before you can make a withdrawal. If you do not redeem the bonus within 30 days of making the deposit, the bonus and any winnings won using it will be forfeited. You must pick up the offer within 30 days of creating your Betsson account.Bonus can only be used in the casino. POLAND Welcome Offer: 200% Bonus up to 500 PLN + 200 Bonus Spins + 50 PLN Live Casino Bonus!
Betsson Casino is offering new customers from Poland a 200% First Deposit Bonus up to 500 PLN + 200 Bonus Spins on GONZO'S QUEST! That's not all, you'll also receive a 50 PLN Bonus for the Live Casino!

Register your account if you have not done so and make your first-ever deposit of 40 PLN or more to receive the Welcome Offer.

Sisters of the Sun

Who Wants to be a Millionaire Megapays

Brawl at the Redcap Inn

Betsson granted online gaming licenses in Greece
24 May 2021
Betsson.gr will offer sports betting, casino, live casino, and virtual sports. Betsson received two of the new HGC licenses to operate in Greece; one license for games of chance and another one for sports betting. read more