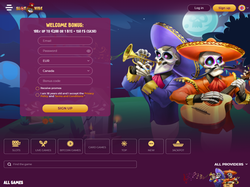 EXCLUSIVE CASINO CITY OFFER: 20 No Deposit Required Bonus Spins!Slotvibe is offering this Exclusive Offer for 20 spins on AZTEC MAGIC slot game from BGaming with your player account registration - NO DEPOSIT REQUIRED! Sign-up using Code: CCITY20 to automatically receive the 20 spins and then grab the First Deposit Bonus providing Up to €550 in Bonuses + up to 200 Spins across your first four deposits.

Book of the Fallen

Merlin and the Ice Queen Morgana

Rich Wilde and the Wandering City

Legend of the Ice Dragon

SlotVibe welcoming new players with bonuses
15 Mar 2022
SlotVibe welcomes every new player with a welcome package of up to $/€550 or BTC1 for their first four deposits and bonus spins on Aztec Magic when they use a signup code. read more

Support  - support@casino.com
Affiliate  - affiliates@slotvibepartners.com
Support Option  -  E-mail Entry Form, and Live Chat.
Errors/Omissions? If there are any inaccuracies in our data, please Let Us Know!