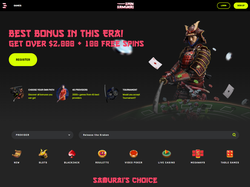 Curse of the Werewolf Megaways

Other sites owned by Dama N.V. include FortuneToWin, Bitkingz Casino, and KatsuBet.