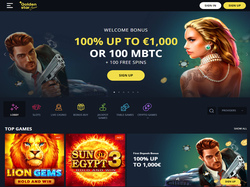 countrycode=US
Welcome Offer: 100% Bonus up to $1000 or 50 MBTC + 100 Spins!Golden Star Casino is offering new customers a 100% First Deposit Bonus up to $1,000 (varies by currency) or 50 MBTC plus 100 spins on LUCKY SWEETS slot game! Free spins will be given within five days starting from the day you activate the bonus, 20 free spins per a day.

Use Bonus Code: GS100 before making your first deposit to receive the offer.

Alpha Affiliates is the affiliate program that represents Golden Star Casino. To find out more about the program visit the Alpha Affiliates profile page.
Errors/Omissions? If there are any inaccuracies in our data, please Let Us Know!