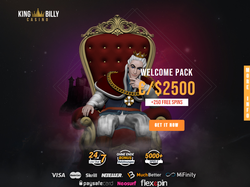 Simply register your account, deposit a minimum of €/$ 10 or more and enter the offer Bonus Code.

King Billy Casino offers 245 free spins for Easter
11 Apr 2020
The promotion has a low enough wagering factor (30x) and no max win. It is available once a week and it is valid until 21 April 2020. read more

King Billy Casino joins forces with Big Time Gaming
17 Feb 2020
The partnership means that new online slot games such as White Rabbit, Temple Quest, Kingmaker and Who Wants to Be a Millionaire are now available to play at King Billy Casino. read more

King Billy Affiliates is the affiliate program that represents King Billy Casino. Visit GPWA.org to learn more about this program.
Errors/Omissions? If there are any inaccuracies in our data, please Let Us Know!