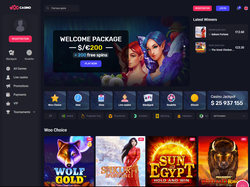 Deposit a minimum of $/€20 (or equivalent currency) using the appropriate Bonus Code to receive the offers.

* All and any bonuses are available to players from any countries except for Croatia (HR) Hungary (HU) Slovenia (SI) and Serbia (RS). Players from Finland aren't eligible for any deposit-based bonuses. To get any deposit bonus credited to player’s account, player needs a deposit of at least EUR 20 (or equivalent currency). To activate any deposit bonus, the player must use the bonus code provided in the bonus description (unless stated otherwise in the bonus description). All deposit bonuses have a wager x40. All bonuses are not available in crypto currency. T&C's Apply, 18+, Please Gamble Responsibly

Support  - support@woocasino.com
Support Option  -  Live Chat.
Errors/Omissions? If there are any inaccuracies in our data, please Let Us Know!