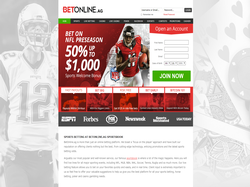 BetOnline Sports is an online sportsbook also offering esports, live/in-play betting, and racebook using ESI Sports and UltraPlay software It is one of 6 online gaming sites owned by CommissionKings. The site's primary language is English. It supports both downloadable software and the ability to place a wager without a download.

Top 10 ways to bet the Floyd Mayweather vs. Conor McGregor fight
21 Aug 2017
Rapidly-changing odds and the betting crowd's general anticipation of this historic match have made it a hotbed of wagering action. Here are the top 10 ways to invest in the match. read more