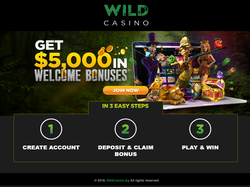 WildCasino is an online casino also offering baccarat, blackjack, live dealer games, other games, roulette, scratch cards, skill games, video poker, and virtual sports using Betsoft Gaming and Nucleus Gaming software It is one of 4 online gaming sites owned by CommissionKings. The site's primary language is English. A download is not required to place a wager.

A Time to Win

Spirit of the Nile

Howling at the Moon