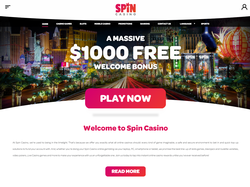 Spin Casino is an online casino also offering baccarat, blackjack, live dealer games, other games, roulette, scratch cards, and video poker using Evolution and Microgaming software licensed in Malta and United Kingdom. It is one of 13 online gaming sites owned by Betway Group. The site's primary language is English. A download is not required to place a wager.

countrycode=US
Up to $1000 Welcome Bonus Package!
Spin Casino is offering new customers up to a $1,000 Welcome Package. Register your player account today to receive the following bonuses:

Seven millionaires in seven months on Microgaming's progressive jackpot network
12 Aug 2020
On 20 July, Microgaming’s Major Millions progressive slot was hit for €1,650,382.89 at Spin Casino – the seventh millionaire to be made on the network this year, equating to one millionaire a month on average. read more