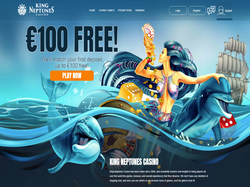 King Neptune's Casino is an online casino also offering baccarat, blackjack, live dealer games, other games, roulette, scratch cards, video poker, and virtual sports using Evolution, NetEnt, and Microgaming software licensed in Kahnawake and Malta. It is one of 14 online gaming sites owned by Bayton Ltd. The site's primary language is English. It supports both downloadable software and the ability to place a wager without a download.