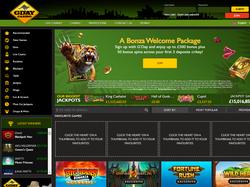 * UK significant terms: * UK significant terms: New players only. One bonus offer per player. Minimum deposit of £20, Max bonus bet £5 Bonus offer must be used within 30 days and bonus spins within 10 days, otherwise any unused shall be removed. Bonus spins are valid on the following games only: Jungle Spirit, Starburst, Hotline and Fruit Spin. Bonus funds are 100% of your first deposit up to £100, 50% of your second deposit up to £250, 50% of your third deposit up to £150 Bonus funds are separate to Cash funds, and are subject to 35 x wagering the total of bonus, cash & bonus spins. T&C's Apply, 18+, Due to UKGC legislation: UK residents can no longer use credit cards to fund their accounts. Gambling Can be Addictive, Please Gamble Responsibly, BeGambleAware.org