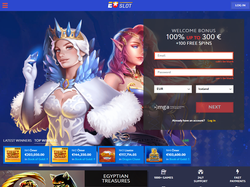 countrycode=US
Welcome Bonus: 100% Bonus + 100 Spins!
EUSlot Casino is offering new customers a 100% First Deposit Bonus plus 100 Spins. Bonus Spins will be given within 5 days starting from the day you activate the bonus, 20 spins per day!

* Not available to players from Sweden. To get the bonus, enter the bonus code EU100 before the deposit. Full wagering requires making bets for the amount 40 times the amount of the bonus received:(deposit bonus + winnings from free spins) × 40. T&C's Apply, 18+, Gambling Can be Addictive, Please Gamble Responsibly

One Hundred To One

Alpha Affiliates is the affiliate program that represents EUSlot Casino. Visit GPWA.org to learn more about this program.
Errors/Omissions? If there are any inaccuracies in our data, please Let Us Know!