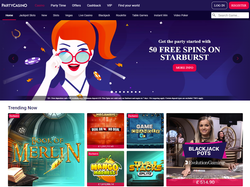 countrycode=US
Rest of World Welcome Bonus: 100% Bonus up to $500 + 20 Spins!
PartyCasino is offering all new customers (excludes UK) a 100% up to $500 bonus spread across your first three deposits (minimum deposit $10) when entering Code: WELCOMEBONUS. You'll also receive 20 Spins on the popular MELON MADNESS DELUXE slot! Join the party at PartyCasino!

* Offer available to new players only. Minimum deposit $10, maximum bonus $500. Deposits via Neteller, Entropay and Skrill are excluded from this promotion. Welcome Bonus is claimed as 3 bonuses via 3 separate deposits. You have 30 days to wager 35 times your bonus and deposit amount. You have 3 days to wager 10 times your Free Spins winnings amount. Bonus and winnings will be removed if wagering is not met. T&C's Apply, 18+, Please Gamble Responsibly

2. Use Code: WELCOMEBONUS when making your first minimum deposit of £10 (a “Qualifying Deposit”)

Age of the Gods: Ways of Thunder

Age of the Gods: Norse King of Asgard

Deal or No Deal Megaways

Kingdoms Rise: Guardians of the Abyss

Evolution Gaming and BetMGM sign partnership for US market
28 Aug 2020
Initially the agreement will result in a number of Evolution’s live table games, as well as game show-style games, being made available to customers of BetMGM. read more