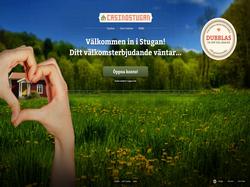 Cherry granted eight licenses for online gaming
21 Dec 2018
Effective from 1 January 2019, eight brands within the Online Gaming business area will be able to offer games and betting in the Swedish market. read more

Oryx Gaming teams up with ComeOn!
31 Jul 2018
The agreement will see the games launch onto ComeOn! and other well-known local casino brands such as Snabbare, CasinoStugan and Folkeautomaten. read more