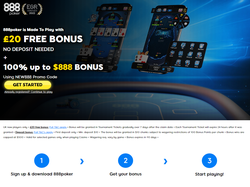 888 Poker is an online poker room using 888 Holdings software It is one of 117 online gaming sites owned by 888 Holdings Plc. The site's primary language is English. It supports both downloadable software and the ability to place a wager without a download. 888 Poker runs on the 888 Poker Network.

countrycode=US
No Deposit Required Bonus: Enjoy $88!It’s easier than ever to get started at 888poker. As a special welcome to new players, you'll receive a generous no-deposit Poker Bonus to get started.

Get $88 with no deposit needed! Simply sign up with 888poker, verify your email address, login and enjoy your $88!

888 launches under a local licence in Ontario, Canada
4 Apr 2022
The online betting and gaming company is pleased to announce that it has launched its 888 Sport, 888 Casino and 888 Poker brands to players in Ontario, Canada. read more