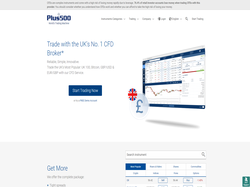 Plus500 is an online forex site also offering binary options using proprietary software It is owned by Plus500 UK Limited. The site's primary language is English. It supports both downloadable software and the ability to open a position without a download.

Support  - support@plus500.com
Support Option  -  E-mail Entry Form, and Live Chat.
Errors/Omissions? If there are any inaccuracies in our data, please Let Us Know!