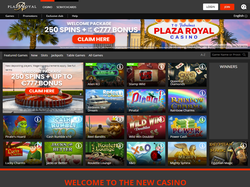 * The "Welcome bonus" must be wagered at Plaza Royal within 21 days of being credited to your account. Plaza Royal reserves the right, at any time, to revoke any welcome bonus not used within the allotted time period. You are required to have a wagered a minimum of 35 times the sum of your welcome bonus before cashing out any winnings. All Spins credited to a player's account must be used within 1 day from when the offer was granted. Unused free spins will be removed from the account thereafter. Spins are considered as a bonus and must be wagered before any winnings can be cashed out.

Force of the Gods