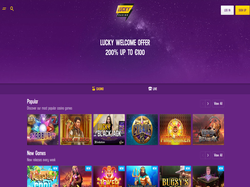 Back to the Fruits

Top 10 online jackpot wins of 2020
14 Dec 2020
As we approach the New Year, we take a look at 10 massive jackpot wins this year that took place at online casinos. read more

Biggest jackpot win at a Swedish online casino
20 Aug 2020
A lucky winner at LuckyCasino has won €14,239,532.84 on Microgaming’s Mega Moolah progressive jackpot, marking the largest at an online casino in Sweden.  read more

Leander adds Glitnor sites to its roster
26 Nov 2019
All proprietary and third-party content will now be available to gamers on all Glitnor's sites. read more

Support  - support@luckycasino.com
Affiliate  - affiliates@luckycasino.com
Support Option  -  E-mail Entry Form, and Live Chat.
Errors/Omissions? If there are any inaccuracies in our data, please Let Us Know!