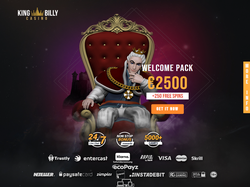 Simply register your account, deposit a minimum of €/$ 10 or more and enter the offer Bonus Code.

The Rise of AI

Age of the Gods: Glorious Griffin

King Billy Affiliates is the affiliate program that represents King Billy. Visit GPWA.org to learn more about this program.
Errors/Omissions? If there are any inaccuracies in our data, please Let Us Know!