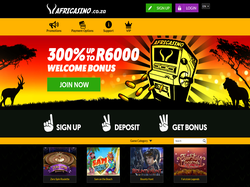 countrycode=US
Welcome Bonus: Deposit Bonuses up to R10'000 + 100 Zero Wager Spins!
New players joining Africasino can grab themselves a fantastic Welcome package offering up to 10'000 Rand plus 100 Zero Wager Spins on one of the following games: FRUIT ZEN, BOOMANJI or 88 DRAGONS! Deposit a minimum of R50 or more using the Bonus Codes to receive the offer.

* The value of the zero wager spins given is based on the minimum bet value of the game. If any part of your Welcome Bonus is not credited automatically, please contact our customer support team immediately on live chat so that it can be credited manually. If the deposit has been played before the bonus is credited, the bonus will not be granted. Players can cancel a bonus by contacting our 24/7 customer support. This can only be done before a bet is placed. Players can contact our 24/7 customer support to stop automatic bonuses before they deposit. The welcome bonus balance is subject to 45 times wagering requirements before withdrawal can be made. General Bonus T&C apply. T&C's Apply, 18+, Gambling Can be Addictive, Please Gamble Responsibly

Rome: Rise of an Empire

Freya: Arrow of the North