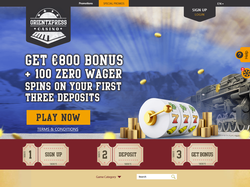 countrycode=US
Triple Welcome Bonus: Up to €800 in Bonuses + 100 Zero Wager Spins!
Orient Express Casino is welcoming new customers with a triple Welcome Offer across your first three (3) deposits totaling up to $800 in Bonuses and 100 Zero Wager Spins to use on the following games: FRUIT ZEN, BOOMANJI or 88 DRAGONS! Simply deposit €10 or more on each offer using the Bonus Codes to receive the offer.

* A minimum deposit of €10 (100kr, $10) is required to claim the Welcome Bonus. The value of the cash spins given is based on the minimum bet value of the game. The welcome bonus balance is subject to 45 times wagering requirements before withdrawal can be made. General Bonus T&C apply. T&C's Apply, 18+, Gambling Can be Addictive, Please Gamble Responsibly