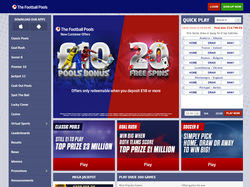 Wheel of Fortune On Tour

FSB agrees to deal with The Football Pools
2 Oct 2018
FSB will deploy its sportsbook solution and trading tools for the U.K.’s pools provider. read more

The Football Pools to begin offering BetUp
5 Aug 2016
The second screen live betting game from Commologic will be released across desktop and mobile in time for the Premier League football season. read more