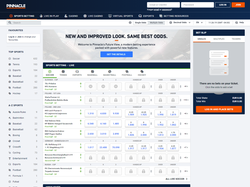 Full agenda for Betting on Sports 2019 announced
10 Jun 2019
The event at Olympia London from 17 to 20 September will feature more than 300 industry expert speakers across 13 specialist tracks, with an expected 3,500 delegates in attendance from around the world. read more

Pinnacle becomes official betting partner for ECS 2019
4 Mar 2019
The partnership will include real-time odds support, and will continue throughout the regular season and the finals of the Esports Championship Series. read more

Customer Service  - customerservice@pinnacle.com
Affiliate  - affiliates@pinnacle.com
Support Option  -  E-mail Entry Form, and Live Chat.
Errors/Omissions? If there are any inaccuracies in our data, please Let Us Know!