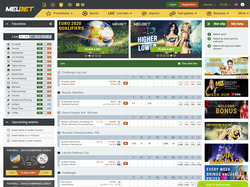 countrycode=US
SPORTS: 100% Bonus up to 100 EUR!Melbet is offering sports bettors a 100% up to 100 EUR First Deposit Bonus! Simply register your account and deposit a minimum of 1 EUR or more to activate the bonus. The bonus amount must be wagered 5 times in accumulator bets. Each accumulator bet must include a minimum of 3 events. At least 3 of the events included in an accumulator must have odds of 1.40 or higher.

* The bonus must be used within 30 days of registration. After 30 days the bonus and all winnings made on the bonus will be revoked. T&C's Apply, 18+, Please Gamble Responsibly

* Free spins will only be awarded after the deposit bonus has been redeemed and can be used in Down the Pub . Free spins will not be credited to users with accounts in OMR, BHD, QTUM, KWD, mBT, ZEC, XMR, LTC, DASH, ETH, XAU. All deposit bonuses must be redeemed by wagering the bonus amount 40 times within 7 days. Until the bonus has been redeemed, stakes cannot be higher than €5. The offer doesn't include the following Fast Games: Pachinko, PF Dice, PF Roulette, PF Pokerlight, Lucky Wheel, Greyhound Racing, Monkeys, African Roulette, Crown & Anchor. The list of available games may differ on the desktop and mobile versions of our website and can change at any time. T&C's Apply, 18+, Please Gamble Responsibly

The Secret of Ba

Ivan Not the Fool

Support  - support@melbet.com
Affiliate  - support@melbetaffiliates.com
Support Option  -  Phone.
Support Line - +8 8003331578
Errors/Omissions? If there are any inaccuracies in our data, please Let Us Know!