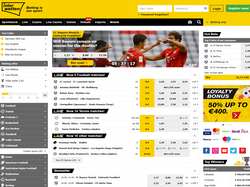 Interwetten Sports is an online sportsbook also offering esports, live/in-play betting, and virtual sports using 1X2 Network, Kambi, Leap Gaming, Sportradar, and SBS software licensed in Malta and Schleswig-Holstein. It is one of 10 online gaming sites owned by Interwetten Gaming Ltd.. The site's primary language is English. A download is not required to place a wager.

You can unlock the bonus for the entire offer; You can unlock the bonus amount in five steps under the best conditions. If you reach one of the five steps, the unlocked amount can be paid out immediately. The bonus amount can be made valid through several deposits (up to €100). Winnings can be paid out at any time following a onetime transaction of the deposit amount,

* The welcome bonus is available for every deposit until it reaches the maximum amount at €100. To get the bonus you need to place a wager which must happen within 14 days. Sportsbook the deposit amount must be staked 5 times. Casino/Games/Scratch Cards the deposit amount must be staked 30 times. To fulfil the stake conditions, the amounts staked in different games will be weighted with different percentages. The minimum odds are 1.7 T&C's Apply, 18+, Gambling Can be Addictive, Please Gamble Responsibly