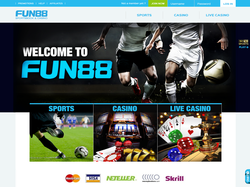 Fun88 UK is an online sportsbook also offering casino games, esports, games, live/in-play betting, lottery, and racebook using MultiSlot, Microgaming, RSG, and SBTech software licensed in Isle of Man and United Kingdom. It is one of 3 online gaming sites owned by Welton Holdings Limited. The site's primary language is English. A download is not required to place a wager.

Other sites owned by Welton Holdings Limited include TLCBet, and Fun88 EU.