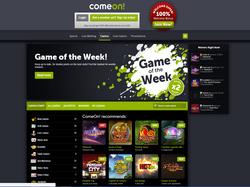 * This offer is only open to new Canadian customers who are 18+. You will have a total of 7 days to complete the bonus from the activation date. The offer can be claimed a maximum of 3 times. This offer cannot be used in conjunction with any other Welcome Offer including the Sportsbook Welcome Bonus or any Enhanced Odds promotions. Upon registration you may choose which Welcome Offer you would like; Sports or Casino. You cannot choose both bonuses. The maximum bonus you can receive for each deposit is $500. Wagering Requirement 40x deposit and bonus. The maximum bet allowed when using a bonus balance in the casino is $8 per spin or hand. Failure to comply may result in the forfeit of any winnings. Stakes on some of our casino games don’t count in full towards the wagering requirement. T&C's Apply, 18+, Gambling Can be Addictive, Please Gamble Responsibly

* This offer is only open to new Canadian customers who are 18+. This Sports Welcome Bonus cannot be used in conjunction with any other Welcome Offer including our Casino offer. You will have a total of 30 days to complete the bonus from the activation date. Maximum bonus amount is $500. Minimum wagering requirements apply. You will need to wager your bonus before you can withdraw as follows: Sportsbook: 10x, at minimum odds 1.75, deposit and bonus. You cannot combine Sportsbook and Casino to achieve the minimum wagering requirements on this bonus. Each way bets or bets placed on Asian Handicap are excluded. The $500 Sports Welcome Bonus will be credited to your account within 24 hours after your first qualifying bet has been accepted. T&C's Apply, 18+, Gambling Can be Addictive, Please Gamble Responsibly

FINLAND Sports & Casino Welcome Bonus - 100% Bonus up to €300!
New players at ComeOn from Finland are welcomed with a 100% First Deposit Bonus up to €300 to use at the Casino, Sportsbook or Live Games! Register your account, select the bonus and deposit €10 oro more to receive the offer.

GERMANY Sports Welcome Offer: Up to €200 Bonus!
ComeOn! is offering new customers from Germany a 100% First Deposit Bonus up to €200! Make your first-ever deposit of €10 or more to receive the 100% Match Bonus!

REST OF WORLD Welcome Offer: 100% up to €25!
ComeOn is offering all new customers a 100% up to €25 Welcome Bonus! Register your player account and make your first deposit to receive the 100% Bonus.

Zombies at the Door

Canadian Premier League announce partnership with ComeOn
7 Jun 2021
Through this new partnership, the ComeOn! logo will be on a CPL Club jersey starting with the 2021 season. read more