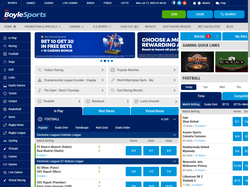 BoyleSports is an online sportsbook also offering live/in-play betting, racebook, and virtual sports using Metric Gaming, SIS, and Zukido software licensed in Gibraltar and United Kingdom. It is one of 7 online gaming sites owned by Boylesports Ltd.. The site's primary language is English. A download is not required to place a wager.

countrycode=US
IRELAND Welcome Offer: Bet €10 Get €40 in Free Bets!
Boylesports is offering new customers from Ireland €40 in free bets which consists of a €30 Sportsbook bet to spend how you please and a €10 Casino bonus at the same time, simply login to any casino game and click accept to claim it. Place a bet of £/€10 or more at odds of EVS (2.0) or greater, and receive £/€40 (£/€30 Sportsbook Free Bet + £/€10 Casino Bonus).

UK Mobile Welcome Offer: Bet £10 Get £20!
Boylesports is offering new UK customers an exclusive Bet £10 Get £20 Bonus! Register and deposit, place a qualifying bet of £10 or more at odds of EVS (2.0) or greater to qualify and receive a £20 Sportsbook Free Bet!

Relax Gaming Gibraltar secures UKGC license
13 May 2021
The approval by the Gambling Commission will see Relax's roster of casino games made available to U.K. operators through its Gibraltar arm. read more