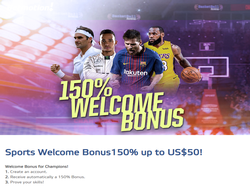 BetMotion Sportsbook is an online sportsbook also offering esports, live/in-play betting, and virtual sports using EveryMatrix and Sportradar software It is one of 3 online gaming sites owned by Vision Media Services N.V.. The site's primary language is English. A download is not required to place a wager.

* This promotion is valid for players who register with the Promocode SPORTS150. Available only for Sports betting. This promotion is valid for the first deposit made on the site. New players will automatically receive a 150% Bonus up to $50 (EUR50/ R$150/ 1000MXN/ S/150). Before being able to withdrawal, you must Rollover 5 times the value of the Bonus in bets with Odds equal or greater than 1.50. Only the first bet placed on each event is valid to Rollover. Canceled bets, bets that have been used the Cashout tool or wagers made with free money are not considered for this promotion. Betmotion.com works with two separates wallets, Bonuses and real cash. You can only use the Bonus when the real cash balance is zero. Otherwise you must play first with the cash and then with the Bonus. If you place a bet that includes cash and Bonus at the same time, the prize to be won will be proportional to the value wagered with each wallet. Bonus will be valid for 30 days after received and used for the first time. T&C's Apply, 18+, Please Gamble Responsibly

Betmotion launches new website powered by Salsa Technology
5 May 2022
Alongside a rich array of sports and online gaming offerings on Betmotion, users now have even quicker page load times and menus that are seamless to move between. read more