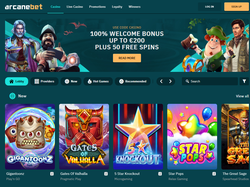 Simply enter the bonus code into the bonus code box on the deposit page before making a deposit of €/$10 or more. The bonus will automatically be credited to your account upon a successful deposit, granted all requirements are met.

* New customers only; To convert this bonus into cash you need to reach the rollover of x15 with awarded bonus amount. In order for bets to count towards rollover they need to be placed against bets at odds of 1.85 or more. Total bonus awarded for this offer is 30 EUR or any currency equivalent. This offer is available to claim until 01/01/2022. Once claimed you have 7 days to reach the rollover before the bonus expires. T&C's Apply, 18+, Gambling Can be Addictive, Please Gamble Responsibly

Riddle Reels: A Case of Riches

Elite of Evil: Portal of Gold