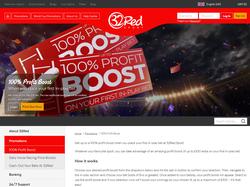 32Red Sport is an online sportsbook also offering esports, live/in-play betting, and racebook using Kambi software It is one of 2 online gaming sites owned by 32Red Plc. The site's primary language is English. A download is not required to place a wager.

countrycode=US
UK/IRE First In-play Bet Offer - 100% Profit Boost!New customers from the UK and Ireland can get up to a 100% profit boost when you place your first in-play bet at 32Red Sport!

1. Opt-in for this promo

2. Choose your desired profit boost from the drop-down menu and click the opt-in button to confirm your selection.

3. Then, navigate to the in-play section and choose your bet (odds of Evs or greater). Once added to your bet-slip, your profit boost will appear. Select to use the profit boost and if your selection wins your winnings will be boosted by your chosen % up to a maximum of £100 – it’s that easy!