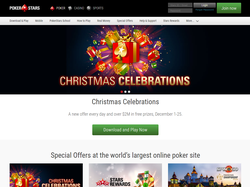 PokerStars Europe is a downloadable poker room using proprietary software licensed in Malta. It is one of 29 online gaming sites owned by The Stars Group. The site's primary language is English. PokerStars Europe runs on the PokerStars Network.

The Netherlands Gambling Authority fines PokerStars
24 Sep 2019
The €400,000 fine was imposed on TSG Interactive Gaming for offering the possibility of playing poker on the PokerStars Europe website. read more

Sports stars prepare for PokerStars Festival Dublin
22 Sep 2017
Wayne Bridge, Michael Duberry and Stephen Hendry will participate in the PokerStars tour next week, putting their poker skills to the test from 25 September to 1 October. read more