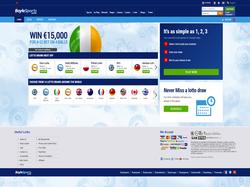 BoyleSports Lotto is an online lottery site licensed in Gibraltar and United Kingdom. It is one of 7 online gaming sites owned by Boylesports Ltd.. The site's primary language is English. A download is not required to place a wager.

* 18+. Min stake €/£2. Min odds 1/2. First bet only. Register between 27/03/2020 00:00 BST and 01/05/2020 23:59 BST to qualify from selected partner links. Free bets expire in 7 days. One Free bet offer per customer, household and IP address only. Qualifying bet must be placed within 30 days of account opening. Cashed out bets won’t apply. Freebet stakes will not qualify for this offer. Free bets will not qualify for any other special offers. Payment method restrictions. Irish and UK customers only. T&C's Apply, 18+, Please Gamble Responsibly, BeGambleAware.org