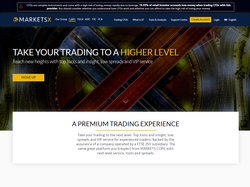 MARKETSX is an online forex site also offering binary options using MetaQuotes software licensed in Australia, Cyprus, United Kingdom, and South Africa. It is owned by Playtech plc. The site's primary language is English. It supports both downloadable software and the ability to open a position without a download.