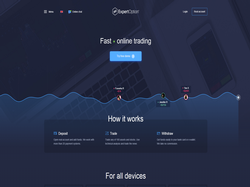 ExpertOption is an online forex site also offering binary options. It is owned by ExpertOption Ltd. The site's primary language is English. A download is not required to open a position.