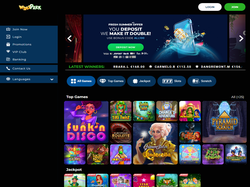 WinsPark is an online casino also offering baccarat, blackjack, live dealer games, other games, roulette, scratch cards, and virtual sports using Evolution, Leander Games, NetoPlay, and NeoGames software It is one of 4 online gaming sites owned by Twino Trading N.V.. The site's primary language is English. A download is not required to place a wager.

countrycode=US
No Deposit Bonus - 50 Gold Rush Spins!Upon signing-up at WinsPark, you'll receive 50 Bonus Spins on slot game GOLD RUSH! No deposit is required, just sign-up, get the 50 Spins, play and win up to £/$200.000!

* No deposit necessary. Take up to 50 free spins by playing our slot games at a minimum bet of 0.10. WinsPark.com user's terms and conditions and bonus rules apply. €18+, Please Gamble Responsibly

End of summer fun at WinsPark
21 Aug 2014
WinsPark still has plenty of great promotions and games on offer throughout August. read more

Celebration time at WinsPark
19 Aug 2014
It could be you celebrating this win next month, as all you have to do is sign up to WinsPark and make your first deposit.  read more

NetoPartners is the affiliate program that represents WinsPark. To find out more about the program visit the NetoPartners profile page.
Errors/Omissions? If there are any inaccuracies in our data, please Let Us Know!