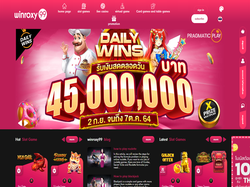 WinRoxy99 is an online casino It is owned by Ableton Prestige Global Limited. The site's primary language is Thai.