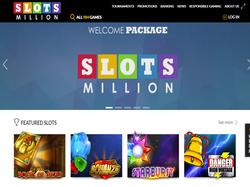 countrycode=US
Rest of World Welcome Bonus: 100% up to £/$/kr 100 + 100 EXTRA SPINS!
SlotsMillion is offering new customers a 100% up to €100/$100/kr1000 Bonus on your first deposit along with 100 Extra Spins over a variety of Slots! Register your player account and make a minimum deposit of £20 to claim this offer and enjoy your bonus and spins!

This offer is available only for players with home address in any of the following countries: Canada, South Africa, New Zealand, Ireland, Iceland, Luxembourg, Slovakia and Peru.

Below are the offer details:

Day 3: +20 extra spins on JACK AND THE BEANSTALK

* Bonus on deposit of 100% up to £100, Not claimable with Skrill, ecoPayz or Neteller, Requires phone verification, Min deposit £20 + 5 bonuses of 20 Extra Spins each, granted each day for 5 days, available for 24h | For each bonuses: Bets limited to £3, Wagering x48 before withdrawal, Contribution to wagering varies between games, Some games cannot be played with bonus, Expiration 7 days after activation T&C Apply.
FINLAND Welcome Offer: Up to € 500 in Bonuses + 50 Extra Spins!
SlotsMillion is offering new customers from Finland up to €500 in bonuses on your first two (2) deposits plus 50 Extra Spins on a variety of slot games!

* This offer is available only for players with home address in Finland. You need to validate your phone number in order to claim the Welcome offer. The bonus on deposit does not apply to deposits made with Skrill, EcoPayz or Neteller. T&C's Apply, 18+, Gambling Can be Addictive, Please Gamble Responsibly

* This offer is only available to players residing in the Netherlands, Germany and Austria. For players based in Germany or Austria: The deposit bonus does not apply to deposits made with Skrill, EcoPayz or Neteller. To claim this welcome offer, you will need to validate your phone number. The bonus money will be converted into real money once it has been played 40 times. The maximum bonus bet is € 5 per bet line. All unused bonus money expires after 7 days. The offer expires 14 days after registration. Due to Germany legislation: German residents can no longer use prepaid cards to fund their accounts and game restrictions apply. T&C's Apply, 18+, Gambling Can be Addictive, Please Gamble Responsibly, gamblingtherapy.org.

Defenders of the Realm

Legacy of the Wild II

The Legend of Hercules

Rage of the Seas

Betsoft pens Alea casino content deal
26 May 2020
Betsoft Gaming has partnered with global casino operator Alea in a deal which will see its slots portfolio available on the flagship SlotsMillion brand.  read more