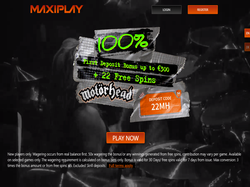 * Bonus or any winnings from the free spins must be wagered 50x before a withdrawal may be made. Wagering contributions apply and vary from game to game. T&C's Apply, 18+, Gambling Can be Addictive, Please Gamble Responsibly, BeGambleAware.org.

* Winnings from bonuses and free spins must be bet 30x before withdrawal. T&C's Apply, 18+, Gambling Can be Addictive, Please Gamble Responsibly

* For new players only. The stake is first used from real credit. 50 times the bonus or winnings from free spins can vary depending on the game. Only available for selected games. The wagering requirements are only calculated for bonus bets. The bonus is valid for 30 days / free spins are valid for 7 days from the date of issue. Maximum turnover: triple bonus amount or from free spins: € 5. Excluded Skrill deposits. Full T&C's Apply, 18+, Please Gamble Responsibly.

Choose one of the Welcome Offers on WARLORDS: