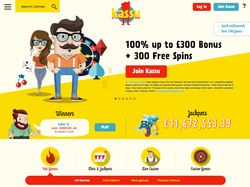 countrycode=US
REST OF WORLD Welcome Offer: up to $1500 + 300 Welcome Spins!Kassu is offering a fantastic welcome package for new players! Receive a bonus offer on your first four (4) deposits as well as 300 Welcome Spins! Deposit a minimum of $10 (or currency equivalent) on each deposit and use the Bonus Code, if required, to receive the offer.

Sun of Fortune: Hold the Jackpot

What The Fox Megaways

Riddle of the Sphinx

Support  - support@kassu.com
Feedback  - complaints@kassu.com
Support Option  -  Live Chat, and Phone.
Support Line - +356 277 828 25
Errors/Omissions? If there are any inaccuracies in our data, please Let Us Know!