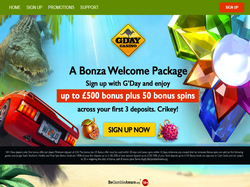 GDAY Live Casino is an online casino also offering baccarat, live dealer games, mobile live dealer, and roulette using Evolution and NetEnt software licensed in Curaçao, Malta, and United Kingdom. It is one of 23 online gaming sites owned by Caddell Limited N.V.. The site's primary language is English. A download is not required to place a wager.

* UK significant terms: * UK significant terms: New players only. One bonus offer per player. Minimum deposit of £20, Max bonus bet £5 Bonus offer must be used within 30 days and bonus spins within 10 days, otherwise any unused shall be removed. Bonus spins are valid on the following games only: Jungle Spirit, Starburst, Hotline and Fruit Spin. Bonus funds are 100% of your first deposit up to £100, 50% of your second deposit up to £250, 50% of your third deposit up to £150 Bonus funds are separate to Cash funds, and are subject to 35 x wagering the total of bonus, cash & bonus spins. T&C's Apply, 18+, Due to UKGC legislation: UK residents can no longer use credit cards to fund their accounts. Gambling Can be Addictive, Please Gamble Responsibly, BeGambleAware.org