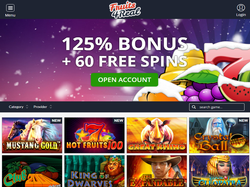 That's not all, more bonuses are on the way with your 2nd and 3rd Deposits!